Unexpectedly, the issue of the use and misuse of antibiotics came up today. This annoyed me, but rather than yell at people, I'll put up a little primer here. I guess spending my time with biologists, chemists, biochemists, microbiologists, and toxicologists means I forgot most people don't spend much time thinking about these things.

Briefly, antibiotics are chemicals that kill bacteria; there are a few that will kill fungi, protists, or other organisms, but the vast majority of antibiotics prescribed for treatment of human illness will kill bacteria. Mode of action varies; many antibiotics interfere with bacterial cell division, which is a process different enough from how animal cells reproduce (e.g. cell wall synthesis - we don't have cell walls, some bacteria do) to hurt the bacteria without hurting the host (i.e. you). The net result of a course of antibiotics is to kill a very large fraction of the bacteria responsible for an infection, or to prevent them from reproducing long enough for the immune system to get ahead of the bacteria and wipe them out.

Antibiotics are an obvious agent of selection. Any bacterial cell that can avoid or reduce the effects of the antibiotic - for example, by producing an enzyme that destroys the antibiotic before it can interfere with the bacterial cell - will have a clear advantage, and its offspring will carry that resistance. This is why it is VERY IMPORTANT to take the FULL COURSE of a round of therapeutic antibiotics. The symptoms of the infection - pain, puss, whatever - might clear up in a few days, but the antibiotics will be in sufficient number of pills for more than a week. KEEP TAKING THE ANTIBIOTICS. The bacteria are down but not out after those first few days; most of the surviving cells may be resistant. In many cases, resistance means reduced but not eliminated effect of the antibiotics, so those nasty cells are still getting hurt, just not outright killed as their less fortunate compatriots were. Keep hammering them, and the immune system will clean up the mess - few bacteria can withstand the double-blow of compromised reproductive ability and roving bands of killer white blood cells.

Here's a picture of a neutrophil, a type of white blood cell (immune system) that targets bacteria and fungi (photocredit to Bob Blaylock and this Wikipedia page). 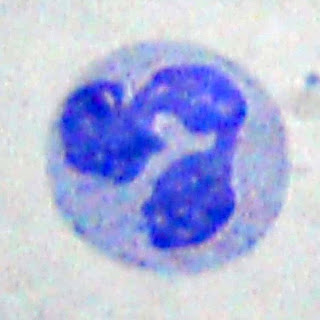 Interestingly, a few years ago I went to talk about antibiotic resistance at McMaster. As should be rather evident based on the short period that we've been using antibiotics, resistance actually evolved long ago, (some bacteria/plants/archaea produce antibiotics naturally, so the selection pressure's been there for a while) and newly arising resistant strains are either a) increasing to large numbers because of selection pressure, or b) acquiring the relevant genes through lateral gene transfer.

What most people don't seem to 'get' is that the antibiotic is simply helping your body take care of a problem that it typically deals with naturally. Some times we get a bigger infection than our immune system can deal with and thus we develop disease (many people 'carry' tuberculosis or leprosy, for example, without manifesting the disease). A small number of of resistant bacteria will be killed by the immune system, but if you switch the balance of infectious bacteria to 50% resistant, then there are too many bacteria for your immune system to do its job, and standard antibiotics can't help you.

You don't want me to use soap?

Maybe you two can help me with a question, since you're 'so' good at explaining to us non-scientists.
I am healthy and very rarely get sick. Every year the flu shot is promoted and we are told we should all get it. I don't get it because I am unlikely to get sick.
I work with kids and because of this some people think I should get the shot.
1.) Can I pass the flu onto my students without me showing any symptoms of the flu?
2.) Can getting the flu shot every year decrease my ability to fight off diseases naturally?

Ruth, soap is good. Soap with antibiotics in it is bad. Soap kills bacteria, by disrupting their cell membranes - soap brings oil-based molecules into water solution, and that includes the phospholipid membranes of bacteria.

1) I'm not 100% sure, but I strongly suspect you can transmit influenza without showing symptoms, or before symptoms appear.
2) A flu shot will have no effect on your natural ability to fight off diseases. It's very specific, and has no effect on any other diseases.

Brummell-- sorry to bring this months-old post up again, but I was reading through your blog, and I'm very curious about your comment against soaps with antibiotics (which I assume is the same thing as antibacterial soaps).

Do you have any links to articles that could shed more light on that? I always assumed that the antibiotics in soaps (and the ingredients of hand sanitizers) were way stronger than anything we take internally, and that therefore there wasn't much danger of producing superbugs on your hands. I figured I was doing a clean sweep, and any bacteria that moved back in were just fresh strains from my surroundings. Is that a bad assumption?

Funny aside-- visited with a doctor once who seemed to have a compulsive habit of hitting the hand sanitizer station every time he passed into, out of, and by our room.

Not a problem at all! I update so infrequently that I'm impressed anyone still reads my rare blatherings.

A good question. I don't have any hand-soap-antibiotics articles on-hand at the moment, so everything I say needs a "citation needed". With that in mind...

I think (but am not sure) that the antibiotics in soap are of the same types and similar concentrations as in topical creams intended to be applied to open wounds. I don't know enough physiology to have any idea how the amounts in pills or injections get distributed in blood or other tissues. In any case, I think most antibiotics work on a threshold effect; below some concentration (or dose) they have limited effects on a susceptible population of bacteria. Above some critical threshold value of dose, though, and additional antibiotic (of that same type) will have no additional effect. For example, imagine an antibiotic that kills 99.9% of bacteria at the level found in 1 mL of topical cream. Increasing the dose to 2 mL is not going to kill any more bacteria, but applying only 0.5 mL might kill susbstantially fewer bacteria. This is probably a massively oversimplified example, but it's how I think about these things.

As for the bacteria on your hands, I expect there is considerable turnover with fresh recruits moving in from the environment. This means you're probably correct that you will experience low personal risk of enhancing antibiotic resistance among the bacteria in your immediate environment. The problem comes from adding sub-lethal levels of antibiotics to the environment, for example the population of bacteria living in sewers. They don't do much harm down there (that's why we build sewers, physical separation from the disease-causing agents), but they occassionally get into other places (e.g. drinking water).

Short of setting your hands on fire (don't do this), you're never going to completely sterilize your hands. Washing with soap accomplishes two useful things in regards to potentially harmful bacteria.
1. Bacteria attached to particles will be swept away as those particles are removed from the skin surface.
2. Some bacteria will be killed outright by the action of the soap, as their phospholipid cell membranes are destroyed by the soap.
I suspect function 1 is much more important in a practical, every-day situation. Many antibiotics interfere with (i.e. slow down, not necessarily completely stop) cell replication in some way. The antibiotic may not actually kill the cells, just make it harder for them to grow and divide, allowing other mechanisms (e.g. immune system, especially white blood cells) to overwhelm the bacteria. Preventing the bacteria on your hands from replicating isn't as useful as simply making them go away. Washing with soap with or without antibiotics probably makes almost no difference to the bacteria on your hands or those washed down your drain. But those antibiotics will still be present, at very low levels, in the downstream environment.

Hand sanitizer works differently. I don't like the stuff, but I don't think it's going to have much in the way of public-health consequences. Sanitizer is not soap, it's alcohol (usually ethanol) in a gel to increase viscosity. It kills cells by precipitating their proteins, effectively dehydrating them very quickly. It doesn't remove the cells or anything else, unlike soap which brings non-polar molecules (oils, basically) into solution where they can be washed away. So, you can still have dirty hands after using sanitizer, there will just be fewer (but certainly not zero) bacteria in there.

Bleach is another story again. It works by oxidizing organic molecules, effectively burning off any carbon-containing molecules. Oils, proteins, sugars, pretty much all of the major components of living things, are carbon-containing. Bleach doesn't get everything, of course, but it can be quite effective in some circumstances at both removing organic matter and killing bacteria. Plus, bleach does wonderful, beautiful things to glass. I love the way a freshly-bleached wine bottle sparkles.

Thanks for the reply, that really helps clear the whole thing up.

So the main takeaway is:

a) Regular soaps are almost or just as effective as antibacterials; the key is to get the stuff off your hands

b) As a bonus, regular soaps won't hurt the environment downstream

That's pretty easy. It's a shame that antibacterials are pretty much all you see in stores.