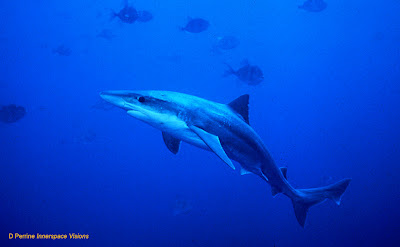 The Tope Shark, a smaller elasmobranch with a wide distribution in the Atlantic, Indian, and Pacific oceans. Picture from here (Hannah, am I close?).

Wow! Looks like the love child of pinocchio and tuna! Is it even... edible? Once this comment goes up, I shall hotfoot it to Google and feed my non-scientisty brain. Close? Arf! You wish Mr Brummell, you wish! ;-) Plenty more floating rocks left on the list!

These guys are edible, they're commonly taken for their fins to make shark-fin soup. I wouldn't be surprised if they occassionally end up fermenting in some Icelandic beach, too.

Never had shark fin soup. Are you suppose to chew on cartilage? As for those lovely critters fermenting on Icelandic beaches, that I do not know, but as far as I know they are not fermenting on Islandish beaches. We do however occasionally get a stray whale, or a stray turtle and those generally don't make it back out into the ocean...

Shark fin allegedly tastes like not very much anything being mostly collagen. The soup itself is heavily flavoured using other ingredients, using shark fin essentially for decoration. Since collagen can be be obtained from other more sustainable sources, and considering the 80 or so million sharks killed for their fins alone every year, makes shark fin soup in my mind highly unethical.

Population studies from scientists estimate that around 95% of all sharks have declined in the oceans.

For an interesting perspective on this matter, watch the documentary "Sharkwater."

Presently, shark finning is banned in Canadian waters but the trade of shark fins is still permitted. Toronto is currently tabling a ban on shark fin.

I agree that shark-fin soup, or pretty much any other human-food made from sharks, is pretty unethical - they're apex predators (mostly), so their population sizes are never going to be particularly large. Plus, the whole amputate-body-part-and-leave-to-die thing.

Shark meat (i.e. muscle tissue) is notoriously un-tasty to humans; they osmoregulate* with ammonium, unlike other vertebrates that use mostly metallic cations (Calcium, Sodium, Potassium). This means their tissues carry lots of ammonium and it contributes to the flavour - mmmmm... bathroom cleaner...

@Necator: collagen? The only edible collagen sources to pass those lips are from greens and non-GM soybeans. Thanks muchly for the docu link - will go educate my non-scientific self.
@TheBrummell: Do you reckon man eats shark meat as some kind of statement, as in "look at me, I'm a big man eating a chunk of dangerous animal"? If you use that logic, I wonder what my broccoli addiction says about me. Oh, and thank you kindly for this lovely, long Scrabblelicious word... ;-) (Sorry about deleting and reposting - there was a big ugly typo that made me blush!)

Hannah, collagen is exclusively produced by animals - it's one of the defining features of Kingdom Animalia.

So either you're mistaken about the material you're getting from greens and soybeans, or you're eating GM plants (I'm not certain any plants have been genetically modified to produce collagen, I kind of doubt it). Any collagen eaten on a fully vegan diet must come from animals, I'm guessing in the form of something leftover from an abatoir's downstream processes that's been dried, purified, and mixed with other materials into a pill form.

As far as the macho-esque "look at me eat scary things", I suspect some of that does happen, but it's so blatantly silly, especially if you're eating things hours after the animal has died and been butchered (a steak never looks dangerous, regardless of its source) that I doubt it happens often.

Broccoli and related plants contain a huge range of really interesting chemicals, most of which evolved as insecticides - plants can't run away, so their defences against getting eaten are more subtle. An addiction to broccoli might say something about an addiction to the mild mind-altering effects of some of those compounds (I say that with tongue planted firmly in cheek).

During my more naive and youthful days I did eat a shark steak or two - and yeah, unless you soak the sh!t out of the thing, it tastes like ammonia. As any foodie knows, you don't soak meat in water - it renders it tasteless and changes the texture. Ergo, another reason not to eat shark - you can get the same experience from a thoroughly soaked pollack (the fish - not the person, such as myself).

Hannah, I must concur with Brummel, you're either eating meat or some GM foods I have never heard of before!

Anyway, not a vegan myself, but doing my best at being a demitarian. That said, I think I will hit my farmer's market today to pick up some locally grown organic water buffalo steaks - yum!

As for the shark macho thing - more people die from vending machines falling on them than shark attacks.

more people die from vending machines falling on them than shark attacks.

That settles it. Next time I'm on a date, I'm totally going to flex and pose in front of a vending machine while eating a chocolate bar purchased from the machine. Look at me, I'm defeating a deadly foe and mocking it at the same time! Rawr!

I wouldn't know what chicks dig...really.

@Martin, if you're trying to pull a junk-food guzzling behemoth of a woman, I'm sure the vending machine strategy is adequate...

Re collagen, thanks for the info - I am officially collagen-free then, as no GM food passes those lips and the bumps on the front are as Mother Nature intended.

My macho reference was directly inspired by the brutes I am surrounded with. The Island is prime macho territory to the point some of those primates will tell you that veggies are unfit for male consumption - they're for rabbits, or worse even... girls. Living here has left me with a rather skew-whiff view of the world...

@Necator, I had never heard of demitarians before, so you Sir are another fine proof that this blog is the place to pick up Scrabble-compatible vocab. Sometimes, that's just the kind of things that chicks dig...