Sunday Drive 10: Back to Saskatoon & Spreading the Meme

I didn't keep very careful track of kilometre-age on my way back to Saskatoon from Calgary, nor was it a particularly interesting voyage – essentially nothing happened. If you don't count the near-miss I had when trying to pass. I saw a vehicle in the left (oncoming) lane far ahead of me, but because it was not showing any lights, I (foolishly) assumed it was the back end of a vehicle also travelling my way, also passing slower traffic. I was incorrect; it was the front of an oncoming pickup truck, one built before daytime running lights were mandated in Canada. My Prelude also predates that legislation, but I run with my headlights on when on 2-lane highways (and most other times, too). 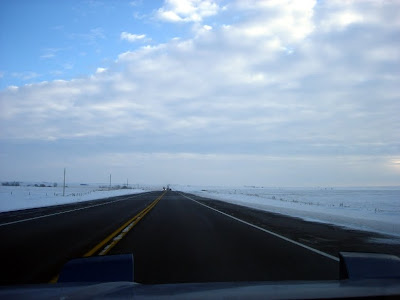 Note the lack of danger, excitment, or anything at all interesting.


Rather than put up a tiny little post and call it a Sunday Drive, I thought I'd try to spread the meme a little. Despite my rather pathetic update schedule (or distinct lack thereof), I'm pretty sure I still have a few readers from various far-flung places. Of course, I could be delusional in this respect.

Most of my Sunday Drives take me on loops into the countryside with total drive-lengths of a few hundred kilometres. Since driving straight back on the same road I went out on is more boring than finding a different route, I tend to stray no further than about 150 km from my home in Saskatoon, as the proverbial corvid flies (NB: around here, the corvid in question is more likely a Magpie (Pica hudsonia) or a Raven (Corvus corax) than a common crow (Corvus brachyrhynchos)).

So, taking a few other locations that I think some of my readers may call home, let's see if I can spot any places I'd visit on a Sunday Drive were I in that part of the world. Maps are from Google Maps, using the "Terrain" option. 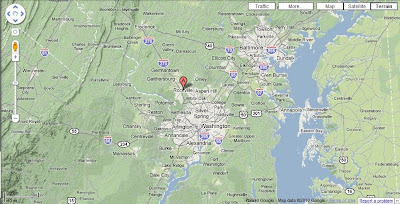 Well, this is pretty obvious, I think. Rockville is very close to Washington, D.C., where there are of course a large number of world-famous places to visit. I probably wouldn't want to drive to most of them, though, given the reputation for traffic jams and parking difficulties that Washington has. Sunday Subway, then.
But, more suitable for automobile travel are a large number of places outside of Washington. There must be some great beaches along Chesapeake bay, and I've long wanted to see that storied body of water in person. The western foothills of the central Appalachians are nearby in the opposite direction, and I'm a fan of a couple of TV shows set in Baltimore; it would be interesting to drive through the harbour area with a couple of screen shots of the second season of The Wire in hand, for example. And there surely are old American civil war battlefields around, so one could visit a re-enactment on the appropriate date. 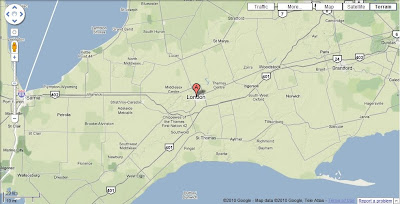 I have relatives who live in or fairly near London, so of course if it was me, I could visit them. Of perhaps more general interest, I know there are some excellent vinyards and wineries nearby; I've been on two wine tours in my life (Okanogan Valley, BC, and Niagara Peninsula, ON), both times were great fun. There are also the shores of the great lakes Erie and Huron, plus the smaller-only-in-a-relative-sense Lake St. Clair. Some interesting Canadian history happened in this part of the country, and I expect there are a number of Provincial Parks and the like not too far away, as well. Also: the only Pilot Truck Stop in Canada is on the outskirts of Tilbury. Pilot are the best truck stops.

Again, the list of obvious places to go is very long. Hope, at the point where the Fraser river spreads onto its floodplain from the mountain gorges, is only 134 km from Coquitlam. And I know from living in Burnaby that there are a large number of dirt and gravel roads among the hills and valleys lining both sides of that floodplain. A vehicle with better ground clearance might be a better choice in that environment than my Prelude. On the other hand, the Mission Speedway allows owners of sports cars (and wanna-be sports cars) to drive on a real racetrack (not just a boring oval) for a fee. But for no-fee just driving around, pretty much the entire Fraser valley is accessible even to an econobox.

There's a place called "Bee Cave" very close to Austin, plus a place called "Nameless" (it doesn't show up on the map at this scale, but Nameless is on Nameless Road! It would be worth the expenses to get vanity plates "NONE" and then get a speeding ticket on Nameless Road). Need I say more? Well, I will anyways. There are hills, lakes, creeks, and forests nearby, as well as a number of small towns that probably have The World's X-est Y in them. In my travels through the southeastern states, I found many interesting things in the triangles of land between portions of the Interstate network - and the way home can be express, because of those interstate highways. I'd be very surprised if central Texas was different in this regard.

Yes, I know somebody in Geelong now, and yes I know this person has read and commented on this blog within the past year. So it counts.
The Great Ocean Road starts in Torquay, just south of Geelong. This is one of the World's Great Roads, and is reason alone in and of itself to visit the island continent. The fact that a Nissan Skyline can be purchased in Australia without onerous import restrictions and modifications is a significant bonus; heck, the R32 is now approaching 20 years old, one shouldn't be terribly expensive. New lifetime goal: I want to drive the Great Ocean Road in an R32, R33, or R34 GTR.
Plus, the zillion other things to see in southern Australia. From the coast to the desert is only about 100 kilometres, from my estimations - prove me wrong! 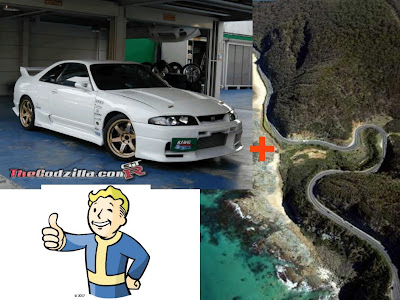 Hi Martin,
Thanks for the post, but I have one point to make, I don't believe that Pilot are the best truck stops, that honour goes to Flying J, I would say. I could just be loyal to my employer though.

I haven't been to many Flying J stops, yet. I'll have to check them out - there's one at the north end of Saskatoon.

Pilot is impressive mainly because even in a part of the world (the US South-East) where coffee is weak, an unusual request, and almost unavailable after noon, Pilot truck stops have fresh, hot coffee ready to go. 24 hours a day, you can get a decent cup of coffee from a Pilot truckstop, even in Alabama.

I didn't know which oil company owns Flying J. Doesn't influence my opinion one way or the other, but it is interesting.