Sunday Drive 8: Down and Dirty

On Saturday, I drove around, ran some errands, and bought some things for the car, including a better jack than the little scissor-jack that Honda supplied with the car, and a pair of jack stands. I’d owned the car for nearly two months, but I’d yet to see the underside. I also swung by Canadian Tire, and bought a new battery. When I’d had the car in to my local (very local) mechanic’s back in October, they’d told me the battery was worn down, maintaining only about 2/3 the charge it should hold.

The weather on Sunday morning dropped to about -30°C, which was too cold for the old battery, even with the effects of the battery-warming electric blanket. My car, despite being clearly intended for the Canadian domestic market when new and having been registered in Saskatchewan for at least the previous two owners, does not have a block heater. Cold, sludgy, viscous oil was too much for the old battery, and it died a slow and feeble death. I had intended to drive to the heated underground parking lot below the Agriculture building at the University of Saskatchewan (i.e. 5 stories below my office) and replace the battery there, but a non-starting car made for a postponement.

I congratulated myself on my forethought in purchasing a new battery, pulled it out of the trunk, and swapped it. 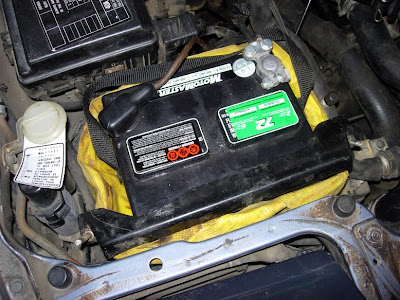 The new battery, in place. The bracket that holds the battery down is fastened with a pair of really long bolts with nuts on them that are really annoying to turn. Especially when wearing heavy gloves in -30 conditions.

The new battery worked like a champ, and I was on my way to school. Parking on weekends in the underground lot costs $3 per exit; it’s free to get in, but you need to drop money in the machine before it will raise the barrier and let you and your car out. By reputation and rumor, I think campus security dislikes people working on their cars in the lots, especially the premium underground lots. But I wasn’t about to get under my car on the frozen gravel of my parking spot, and it’s not like I was planning to change out the transmission or anything else major. I just wanted to get under my car and see.

The store had been sold out of the smallest bottle jacks, the 2-tonne model, so I’d bought the 4-tonne. This proved to be slightly too tall to fit under the lift-point of my low-slung quasi-sports car, at least at the front. The scissor jack actually worked fairly well, though it was a bit awkward because none of the various long-handled tools supplied with it fit through the rotating front of the jack; it’s a matter of just jamming a stick through the loops and twisting through ½ a turn, then pull the stick out and repeat. But I managed to raise the front enough to get the bottle jack in there, then cranking that up was much, much faster and easier than the scissor.

Never work get under a car supported only by a jack! This is an important and sadly often ignored rule. I was well aware of the 1.3-tonne mass of my car directly above me as I slid under the raised front end. The two jack stands worked very well, though I discovered I’ll need to find a way to increase the height of the lift, probably by staging the jack up with a nice big brick or a large lump of lumber. The lowest point of the engine, where the oil-pan drain plug is, was about 10cm in front of my nose – not the best position for turning a wrench. And I’ll want another pair of stands, to raise the back end simultaneously, if I ever want to do anything serious under there.

In any case, I was able to have a look around, and after I checked out the front end I raised the back (bending a piece of not-actually-frame in the process, a little) and had a look back there, too. 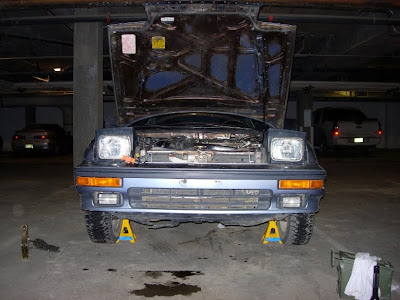 Front end up. This is an accurate picture – there really wasn’t very much room at all under there. 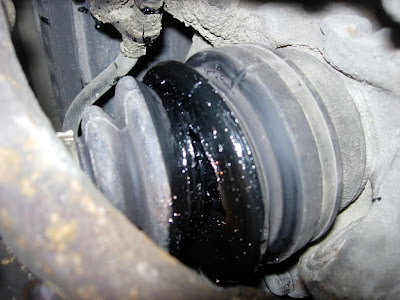 The starboard outer CV-joint boot has a nice big crack in it. The dark shiny stuff is the grease from inside the boot that normally protects the joint. Some of it had splattered around, with blobs on the inside of the wheel and on various bits of the front suspension. 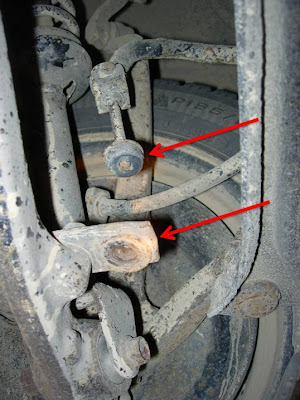 My mechanic had told me my rear sway-bar end-links were rusted out and missing. He was not lying (not that I thought he was). The parts indicated by arrows are supposed to be held together by a bolt run through some rubber/plastic bushings. These are not expensive, and I understand their replacement is not a difficult procedure. When the weather warms up (i.e. April or May), I intend to do this. 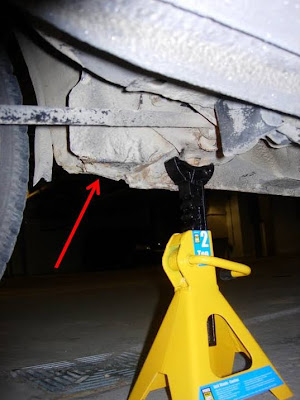 The diagrams I have, both in the Haynes manual and the shop manual I downloaded from a Prelude-owners forum are pretty vague when it comes to the placement of support at the rear of the vehicle. My first attempt here on the port side placed the jack stand too close to the wheel, on a piece of metal that’s actually really thin and not intended to bear much weight (arrow). That bent just a bit before I was able to reverse the jack and try again. Here I’ve placed the saddle of the jack stand directly around a large bolt that seems to fasten two pieces of the frame together. The weight of the car is not on the bolt, it’s on the horns of the saddle on either side of the bolt. I hope that’s OK.

Not surprisingly, my old car has a few issues underneath. But the good news is these are relatively minor – neither the cracked CV joint nor the nonfunctional rear sway-bar make a big impact on driving, and are not safety concerns, and the big important things – oil pan / engine underside, brakes and brake lines, shocks and springs, exhaust and muffler – all looked to be in quite good shape. My mechanic had told me the exhaust and muffler specifically were good, and they’d replaced my front brakes (pads and rotors) and told me the rear brakes were not severely worn. There’s quite a bit of dirt caked onto everything, probably partly a result of my habit of driving on gravel and dirt roads, but where I chipped some off the frame was not rusted and the black anti-rust paint was intact. The only rust I found was on the underside of the doors; the driver’s door in particular is almost completely decayed along a strip at the very bottom. But it looks like the chassis is structurally sound.

I got out from underneath, lamented the dirt that had accumulated on my sweater (I need to get some overalls), and lowered the car back to its wheels. Then I did the final bit of work I wanted to do: aftermarket Yoda install. 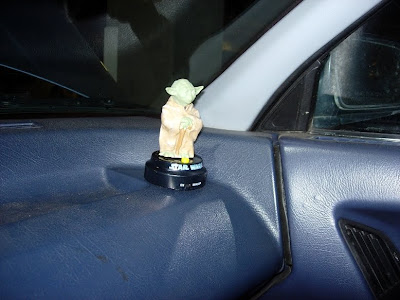 Push the yellow button, and Yoda will train you in the ways of the Force.
Posted by TheBrummell at 2:25 pm
Labels: Car, Sunday Drives

After market Yoda: priceless. Wow, my dad would be proud of you; I have to admit that I've never really been 'into' cars...

and yet I still don't see you mounting any pintles or hardpoints or welding on ablative plastic...

There's a rust / missing paint spot on one of the front corners of the sunroof. When I get around to cleaning that up, I'll look into the pintle mount install.

The plastic armour I want to mount is on back-order; these old Hondas aren't so much autoduelled any more. Once it gets here, I'll also have to upgrade the suspension to take the weight.

In all seriousness, I would like to install a roll cage. The back seat is comically useless, and with a roll cage I could enter some even more cool racing events. That, and better seats and seatbelts.

I think if you remove the rear seats and replace it with a rollcage, the vehicle is reclassified for insurance purposes, it might be considered a "sports" car with only 2 seats... I asked the dealership about why they included rear seats that can only fit a person with no legs, or arms, or torso on my Eclipse... and they said it's for insurance classification..

It IS a sports car! In fact, it's a RACE CAR, now that I have entered it (once) in officially-sanctioned competition! Ice-racing ahoy (once I get my laziness in check and bring this blog up to date).

Saskatchewan insurance is very different from everywhere else on Earth. Because we're the "socialist" paradise/province, insurance rates take into account only 2 factors:
1. Driver experience/record
2. The car.
Sex, marital status, age, none of these things matter here. Cars can be highly modified before they start fretting about insurance. My Prelude is a "2-door car", and I'm pretty sure my insurance is based on the fact it's a 1988 Honda Prelude 2.0Si (remember, it's 22 years old!) and not the fact that I like to slide it sideways around a frozen lake.

Still, it's possible SGI would fret at a rollcage addition. If I get to the point where I can feasibly do that, though, hopefully I'll also be at the point where I can own another car to be my street car / daily driver, and take insurance off the Prelude entirely so it can be free to race unrestricted.

That's when the ramplate, giant stupid spoiler, and fender reinforcement come in, too.

I just checked on the SGI website; searching under "modification" I found their FAQ, which does not describe roll cages but does inform me I cannot replace my gear-shift-knob with a big d20 unless the top face is inscibed with the gear pattern.

Hi, I work for Autotrader and came across your blog. Ever get so frustrated with your car you want to smash it to pieces, but know you actually need it..for ya know…transportation? We’ve got a contest going that actually lets you do just that, and win $30,000 for a new one. You can enter or check it out here: http://cliffyourride.ca
Let us know what you think!

Hey, we told you about Autotrader’s Cliff Your Ride contest a while back and the car has now been cliffed! Check out the carnage on http://cliffyourride.ca. Felix scored himself $ for a new ride for throwing his car off a cliff