As I was preparing to depart on this drive, my phone rang. My boss’ wife, Chantal, had successfully offloaded responsibility for their children on her husband, and was apparently suddenly at a loss for what to do with this bonus of free time. I invited her on my drive, and went to pick her up at home.

I had been planning to drive to the north-east from Saskatoon, to a regional park near Wakaw, about 100 km away. Chantal thought this a fine idea, and we headed out that way, taking highway 5 east until the north-north-east-running highway 41. Both of us were surprised to learn that highway 5 is College drive inside Saskatoon; we each cross this road every day going to and from campus, but neither of us had realized how far to the east it extends – all the way to the Manitoba border. 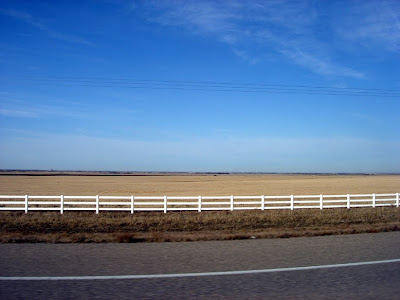 The landscape near Saskatoon to the east and north is even more flat than is normal for this province.

On my previous drive, I’d seen a sign indicating one of the ferries across the South Saskatchewan River was closed, so I had assumed all ferries had closed for the winter. Not so, however, as we discovered the sign for the Hague ferry, further downstream from Saskatoon, was apparently still running. With nothing to lose (except a short drive through the countryside, which we were already engaged in), we turned down the indicated route, which deteriorated to loose gravel very quickly. However, it also approached the river quickly, and we turned down the small winding gravel road, past some people walking their dogs, to the ferry waiting area – a slightly widened patch of dirt road. 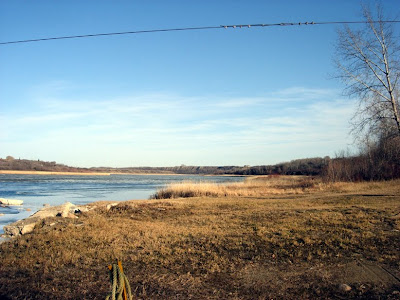 The view downstream from where we waited on the east bank. There was some ice in the river, but no large pans or chunks. 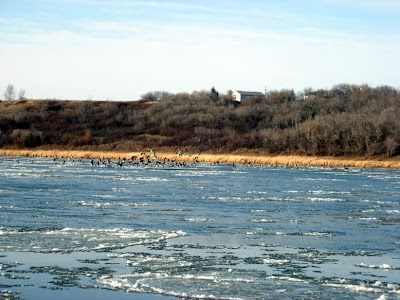 There was a large flock of Canada Geese (Branta canadensis) on the river just upstream of the ferry crossing. As the flock drifted in the current, occasionally the birds would fly upstream a few hundred metres; this seems like an energy-intensive method of keeping position. 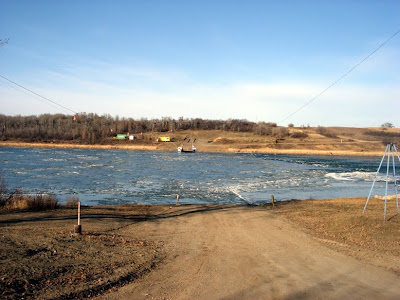 The ferry was on the other side of the river when we arrived. There were no vehicles aboard as it came towards us.

While we waited, another couple of cars showed up, then we boarded the ferry. I managed to avoid any ferry-boarding faux pas this time. 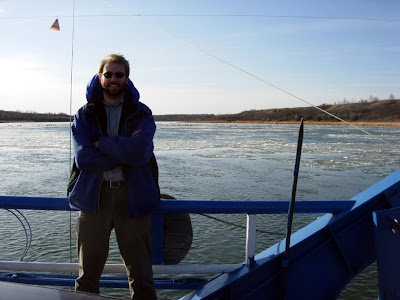 Chantal took my picture on the ferry, looking upstream.


I took a short video during the crossing, watching the ice bump into the ferry.

The ferry took less than 5 minutes to cross, and we were off again on Saskatchewan’s collection of backcountry dirt roads. We were not entirely certain of our location or where we were headed, but in this part of the province a car will reach a major road within a few kilometres regardless. 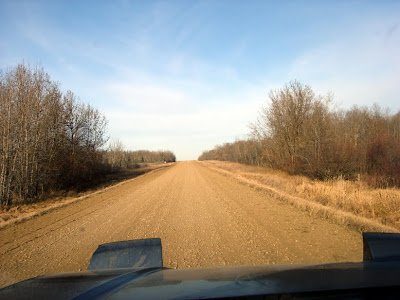 We saw a lot of this. I probably drive too fast on this stuff. In my defence, it’s hard to judge what is a safe speed in the complete absence of curves or other vehicles. 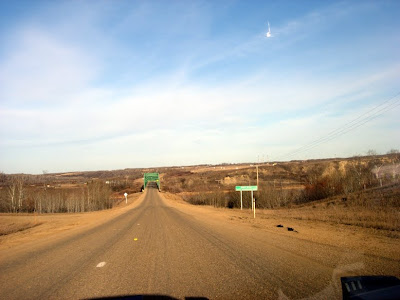 We crossed back over the South Saskatchewan on the Gabriel bridge, on highway 312.

Rather than attempt to visit Wakaw on this trip, we elected to head back to Saskatoon so Chantal could be home in time for dinner with her family. Driving east on highway 312, we saw:
- A forest
- A lake with islands in it
having just been on a ferry. IN SASKATCHEWAN. Mind blowing. 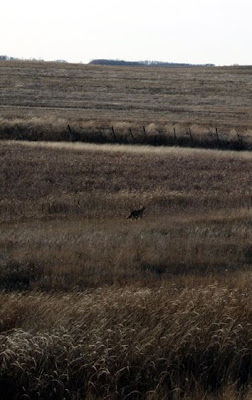 We also saw a coyote, who paused long enough for me to get my camera out, but then ran away as I started clicking. 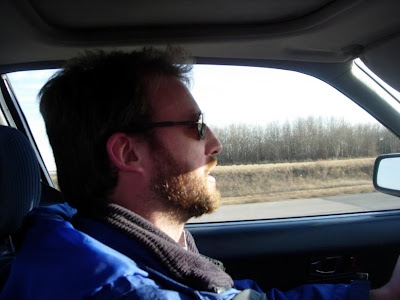 A photo of me, driving down highway 42 back to Saskatoon.
Posted by TheBrummell at 8:15 pm
Labels: Sunday Drives

Hmm, I wonder if I would do the same sorts of scenic drives if I had a car. Not sure though, because I hate driving in big cities.

I'm glad that you have such a casual relationship with the boss and his wife. I can't imagine what it would be like.

Finally, you've gotta trim back on the whole beard thing man. I know it's all part of your image and stuff, but you're not a prof yet and only profs can have crazy beards...

I am 100% certain (1 SE = 0.001%) that you would find interesting and enjoyable roads, features, and destinations within a 1-hour drive of your home in Maryland. Guaranteed.

Big cities are boring and annoying to drive in, but I expect the Megapolis can be escaped fairly easily - traffic jams tend to occur mainly on commuter routes, which are populated by people trying to get into, out of, or transfer within the big city. As long as you didn't go for a drive that coincided with evening rush hour on your way out of town, you probably wouldn't have too many problems. Especially if you deliberately avoid the big routes and stick to the secondary roads - even in town, they're more intersting than the big highways.

The beard gets trimmed slightly more often than once per week. That picture was taken after slightly longer than a week since the last trim, so, yes, it's a bit crazy. But just a bit. And field scientists get a special allowance for physical-appearance eccentricities. I like to claim function as well as form for the beard - I live in Saskatoon, after all.

Woops, just noticed an error. That was Highway 41 we used to return home, not 42.