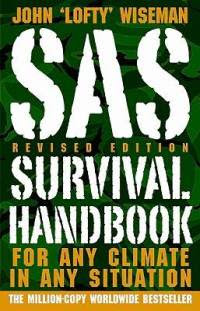 I first heard about this book many years ago, an earlier edition that I recall being a larger format, perhaps the size of a textbook but soft covered. I bought this one recently, after taking a wilderness first aid course that included some material on typical wilderness situations, like helicopter safety and wilderness navigation. This book covers those topics in detail, along with every other aspect of survival situations.

The book is an easy read, with useful information on pretty much every page. It’s supposed to cover every possible environment on Earth, from the equator to the poles, and from the open ocean to mountains, deserts, forests, and even the “home front” (in the case of disasters). There are colour illustrations of the most important plants (food, poisonous, and medicinal) and dangerous animals (e.g. venomous snakes). I particularly appreciated the clear illustrations in the knots and traps sections – I usually find written (or worse, verbal) instruction in rope handling to be horribly ambiguous and unclear, but these descriptions combined with the illustrations are quite good.

I bought this book partly because I’ve wanted to read it for a long time, and partly because I do get a kick out of reading about survival situations, and of course imagining myself in such situations. With my upcoming field work in the High Arctic, the parts dealing with cold climates and the polar regions were particularly interesting. Of the useful plants, I really only paid attention to mentions of willow – it’s one of the few plants even in the sparse Arctic that I can readily identify, and according to this book Willow is rather useful, for such things as the vitamin C in the leaves, or the medicinal properties of the bark.

There were a few annoying typos and what I assume were misplaced words, but overall the style and quality of writing is very good. This book club reads much more like a review than I intended, but what else can I say about this book until / unless I really have to use it?
Posted by TheBrummell at 8:20 pm
Labels: Field Work, Reviews

Suggest you learn your plants. There were some really tasty tubers that Josiah pointed out to us on Coats. Of course, I'm guessing when you say high arctic, you mean the real high arctic, and there won't be much but lichens anyways.

I occassionally find myself getting snobby about discussions of the Arctic.

"Hah! That's Low Arctic, they have continuous ground-cover of plants there, and a soil active layer deeper than 1 metre! That's nothing!"

Fortunately, I smack myself when I get like this.

When I was up North last year I spent some time wandering around with a botanist, and he took great delight in pointing out the edible and medicinal parts of various plants. We even found some Arctic Blueberries (Vaccinium sp.), though they were not carrying fruit.

Outside of the tundra occupying the few lowland oases north of 70 degrees, the species richness of macrophytes is probably about 10. That's bryophytes, gymnosperms, and angiosperms combined - and as far as size, the largest plant I saw on the polar desert was probably a large arctic poppy (Papaver radicatum), with a leaf-span on the ground of about 40 cm, and a similar height. But that individual was exceptional - most poppies I saw were maybe 10 cm across or tall.

If it comes down to it, I'll be living off of willow. I won't have a headache or scurvy, at least.

I did manage to find a few Vaccinium berries while I was up there. And I brought back a couple of freezer bags of cloud berry (Rubus)... um... maybe don't tell anyone about that though. We got an export permit for the caribou meat but we didn't mention the berries.

I really wanted to go to the high arctic last year, but they needed me at Coats. I should be in Sweden next year, so I'm thinking a Svalbard trip is in order (and just for the record, I wanted to go to Svalbard before anyone knew anything about the Golden Compass - not to say the book isn't great).

I had to look up Coats island on Wikipedia - apparently it's at the north end of Hudson Bay. Fun fact: a book I read last year, The Biology of Polar Regions (Fogg et al., probably 1995 or so) devotes considerable attention to weather and climate patterns both in the Arctic and the Antarctic. The well-travelled author describes the weather in Foxe Basin and northern Hudson Bay as the worst in the world. Seems it's not as utterly cold there as is the Antarctic Plateau, but Coats island is in the middle of randomly-changing, powerful winds, lots of blizzards, freezing rain, hail, storms of all kinds, and just general craptacularness. The coldest windchill ever recorded in Canada was from the western side of that region, -70 from -35 or something equally hideous.

How was your visit?

I also knew about Svalbard / Spitzbergen before reading any fictional accounts of it. I think I probably first heard about it (as Spitzbergen) in the context of either polar exploration or whaling, both of which were interests of mine when I was a child (interests in this case being positive or negative, respectively). Definately I would be jealous if you get a chance to visit.

The Arctic is vast, and I'm fascinated by it, so I'm trying to get to lots of different Arctic places.

I suggest you to read it in your Ipod e-book.