It's been way too long since last I ranted, and today isn't even a Monday. Call it busyness; my PhD qualifying exams happen next week, so I think I have a decent excuse (for the last few months, anyways).

Unlike some of my more esoteric previous rants, this one should be comprehensible to the majority of people with access to the technology necessary to read it. But, this is not a rant about anything computer-related. It's a rant about paper tissues and their means of dispensal.

1. Kleenex (and related trademarks of other companies). 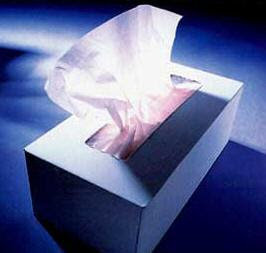 For some reason, about half of the kleenexes (paper tissues, snot-rags, you have your own name for these) I attempt to pull from the ubiquitous boxen either a) stick to the next one in the box, thus giving me two and / or the entire box or b) pull out but do not bring the next one up to the box opening at all. This is annoying. Very annoying. The entire reason for having tissues that pull out one at a time AND auto-load the next tissue is so I can acquire ONE tissue rapidly and efficiently with ONE hand, every time. Both of these failures interfere with that goal. Considering the state of either my face or my hand(s) at the most likely times I'm reaching for a kleenex, this is not excusable. Fix your damn dispensers! 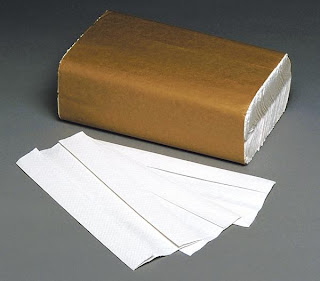 Some washrooms in public buildings, as are often found on university campuses, provide paper towels for the purpose of hand-drying after washing one's hands. Good, fine, see previous rant on air-blowers. The problem here, besides the usual obviousness like running out, is that the metal dispensers for these carefully-folded papers are close to useless. Rarely are they full, closed, and set up; more often they are overfull (a pile of loose papers on top, or, worse, fallen into the sink and useless), hanging open (and thus wetted and hence useless), or not prepped so one must reach into the dispenser (with wet fingers) to obtain the next towel. The problem actually gets worse when the dispenser is absent or not used (or broken): the papers are folded together, presumably by a machine at the time of production. Absent a rigid container, these designed-to-be-dispensed papers are difficult to grab with wet fingers, especially if one needs only a single paper, and they stick together by air resistance, causing the following two or three sheets to follow the chosen, top sheet and flutter to the floor. This is WASTEFUL, and annoying, particularly in some lab settings where airborne paper towels may land in or on sensitive experiments or materials. I don't need to disturb my carefully-measured dry powder (powdered charcoal and agarose are just two of the relatively harmless such materials I have nearly lost as a result of airborne paper towels), and I don't need a paper towel dropping on my notebook while I'm busy scrubbing chemical nasty off my fingers!

* In googling for images for this post, I discovered this method of folding is called "c-folded". 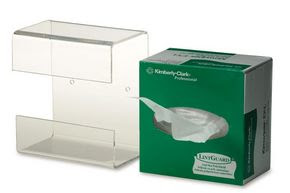 For those unfamiliar with them, KimWipes are the "delicate task wipes" that every laboratory in the world probably has in massive abundance, or wishes they did. They're basically lab-grade kleenex, designed for cleaning small spills of a wide range of chemicals (up to a couple of millilitres, I suppose), for cleaning delicate lab equipment (I use them on my dissecting tools), and similar uses. They come in square little cardboard boxen and are packed much like Kleenex, and have exactly the same problems as outlined above. However, whereas I might have mucus on my fingers when reaching for a kleenex (in most cases a gross if basically harmless material), when I'm reaching for a KimWipe, it is not at all unlikely that my fingers will have a) radioactive material, b) toxic/flammable solvents, or c) bug guts on them (hopefully in all three cases my fingers will also have gloves on them), and that my other hand, the one that cannot be used to stabilize the box or encourage the correct auto-loading of the next tissue, is holding something I cannot put down right now (the list of such objects is long and varied, and runs to live animals and / or fragile objects with commercial values exceeding my lifetime earnings potential).

* The above image includes a Kimwipe dispenser, a plastic (or, rarely, metal) rack that can be bolted to any vertical surface and hold a box of Kimwipes steady against pulls. These are mildly useful; I've met them in the past in some laboratories, but their problems are twofold: 1) The box can slide sideways easily, and often does when the pull is not perfectly orthogonal. 2) These simple little plastic racks are ridiculously expensive, often costing more that $40 each.

See, I think your problem here comes back to a whole cost/benefit analysis. It's like when Fisher and Wright were wondering why the mutation rate never evolves down to 0 - probably because the advantages (which incidentally are debatable because of the obvious lack of adaptability) of doing so are far outweighed by the metabolic costs of having point-perfect repair systems.

But hey, if you want to take the time to develop a 100% perfect-dispensing Kleenex box that'll probably retail for about the price of my new laptop, be my guest. Keep reaching for that Rainbow!

I think incremental improvements could be made to the manufacturing and quality control processes. Better machines for cutting and folding papers, or slight changes in the structure of the paper, could probably significantly reduce these problems.

That, and the invention of a paper towel that does not come c-folded.

Martin,
Move out of academia, and you will find better solutions, we have the no touch auto towel dispensers here at work. The towel comes off a roll and is almost (Say >90%) the perfect amount of towel with no sticking. As for facial tissues, I know your a student but if you buy the nice ones they work better, funny how that is, one box for 0.99 and one box for 2.00 and the expensive one gets one tissue every time, it part of your extra buck goes to marketing and higher profit bbut part goes to higher quality too

2. Paper TowelsIf these are of the same quality as those in German Universities you better only use them for Southern and Northern blotting.

I had a cold a few months ago, and, lacking kleenex or similar soft tissues (and Kimwipes are too small), I used paper towels to blow my nose. That was a mistake - the skin on my nose nearly came off, I was actually bleeding from my upper lip, all very unpleasant.

And, they're not even particularly absorbent - wiping up spilled water in the lab is mostly a process of pushing it around until it dribbles off the edge of the bench onto the floor, where it will evaporate.