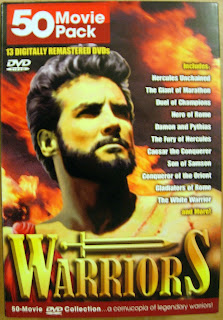 Recently, I foolishly walked into the local second-hand CD store, The Beat Goes On. On the shelf I discovered this package of DVDs, 13 disks covering 50 movies loosely assembled under the category “Warriors”. Of course I bought it, given the sticker price of $21.99 and the resulting cost-per-movie of 44 cents.

Reading through the descriptions of the movies at home, I decided I need to blog about these movies. I’d never heard of ANY of these movies; of the lead actors listed on the back of the package, the only person I’d ever heard of before was Orson Welles, appearing here in David and Goliath (1960). All of the movies were released between 1959 and 1964, except one, Queen of the Amazons from 1947. Most are in colour, though a few are black & white. The majority are also between about 85 and 100 minutes, relatively short compared to most movies of the current era. None are rated.

I’m going to review these movies as I watch them. On a typical day, I get home fairly late, cook and eat dinner, and watch about 20 or 30 minutes of a DVD, as I receive no television signals; the fact I live alone probably contributes to this behaviour pattern. I’ll quote the paragraph of synopsis for each movie (some are hilarious; all are classic swords-and-sandals hyperbole), link to the Internet Movie Database entry, give my own synopsis of the movie, and then provide my opinion, including a ranking out of five stars. If someone can lead me to software that I might be able to use to capture screen-shots (i.e. from the DVD player on my computer), I would be grateful, and I’ll include a few of those, too.

These movies represent what must have been available in local movie theatres in the first half of the 1960’s. This period would have been approximately the time of my parents’ mid-teenage years; if any readers are of a similar age and remember seeing these movies on a big screen, I’d love to hear from you. I imagine that going to the local theatre would have been a popular way to kill time for people of this age range in that period.

This post will serve as the table of contents for this series, and I’ll convert the list below into links as I post reviews. I’m expecting this to be fun; feel free to contribute to the comments in any way you like – I’m especially interested in anyone’s opinion of any of these movies, since (as I mentioned above), I’d never heard of any of these before.

The list is arranged in the (apparently random) order presented on the 13 disks of this collection. Each disk has two sides, “A” and “B”; two movies appear on each side except there is no side B of disc 13.

These have MST3K written all over them

Hercules against the Moon Men has a really long sequence involving sand in it that will bring you to tears.
-Tyler

This sounds truly awesome. I am seriously looking forward to this.

These have MST3K written all over them

"Mystery Sandals Theatre 3000"? I agree, it would be fun to do a TomServo-style voiceover on a couple of these.

Hercules Against the Moon Men, Hercules Unchained and Hercules and the Captive Women have all been MSTied. I have the episodes featuring the first two.
-Tyler

I used to love "sword and sandal" flicks when I was around 12. My favorites were Ben-Hur (1959), The Vikings (1958), 300 Spartans (1962), and one called Gladiators Seven (1963?) -- which I actually saw before either The Magnificent Seven or Kurosawa's Seven Samurai. But I also saw a lot of cheesier ones, and while I don't recognize any of yours I probably saw at least a few. I remember watching with my friends, spotting things like jet contrails in the sky, or wristwatches on extras. Have fun!

Real warriors have a six packs.