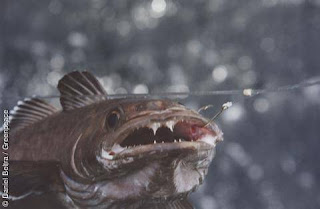 ,p>The Patagonian Toothfish (not a great common name, but somewhat cool), sold to unsuspecting (naive) consumers in North America and Europe under the restaurant name "Chilean Sea Bass"; presumably this is because the term "toothfish" doesn't sound too tasty.

In searching for images for this species, I stumbled across the Australian Government Fisheries Management Authority, which seized a cargo of 143 tonnes of this species when they apprehended an illegally-fishing vessel, the MV Taruman, in late 2005. A picture from that site: 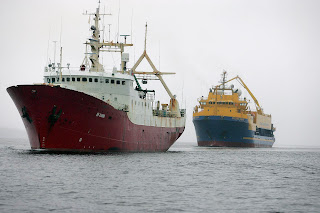 The Australian vessel Oceanic Viking (behind, yellow and blue) escorts the captured MV Taruman to Tasmania, after seizure on the high seas.

I also found the wikipedia pages interesting, both for this species and the whole family Nototheniidae.
Photo credit (the fish) here.
Posted by TheBrummell at 7:00 pm
Labels: Organisms

Correct me if I’m wrong but, aren’t these guys very close to being wiped out. I heard that with modern deep fishing techniques these guys are being harvested at an alarming rate, off the Antarctic shelf no less. My good fish guide tells me to avoid these fish – harvests are unsustainable as they require many years to mature. It’s also what they caught all those giant squid on!

You're not wrong, Necator, at least to my understanding.

These are deep-ocean fish, and have most of the ancient adaptations to that environment you'd expect: very slow metabolisms and associated very slow growth and maturation, very low population densities, reduced tissue density in response to a need for better buoyancy control and a general lack of certain minerals and organic molecules in the diet.

All of this combines to make them a really bad choice for a commercial fishery. My understanding is that the local fisheries for this species (they're restricted to the slopes around sub-antarctic islands - South Georgia, Kerguelens, South Shetlands, etc.) are heavily restricted, such that the number of vessels allowed to fish for them in some places is like 6 - 6 ships per year, maximum. That's a small fishery. Anyway, yeah, I'm not planning to eat this species because of concerns about harvest.