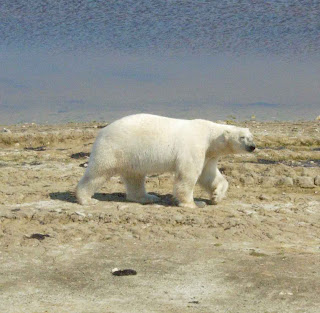 Today, less than one week before I leave Churchill and return to 'civilized' lands, I attended a polar bear and firearms safety workshop. Polar bears (Ursus maritimus) are different from the black (U. americanus) and grizzly (U. horribilus) bears I'm somewhat more familiar with in several very important ways. Besides being bigger, faster, stronger and better-armed than either southern species, polar bears behave quite differently. Perhaps the most important difference is that while grizzlies will very rarely, and black bears will never hunt humans for prey, polar bears are likely to stalk humans as walking meat. This alone means a person's behaviour in bear country has to be quite different. In particular, while I've been told countless times to make plenty of noise while travelling in grizzly or black bear habitat, to avoid surprising a bear, the opposite applies here - stay reasonably quiet, and try not to attract the attentions of any nearby polar bears.

Besides such useful advice (among lots of other important bear-safety tips), we learned about firearms, in the context of bear 'deterents'. Nobody here has any desire to kill a polar bear; they can be legally hunted in Canada, but I'm pretty sure it's not bear season now, and the privilege of hunting is very restricted and probably expensive. So we learned about such things as firecracker and screamer rounds for starter pistols and 12-gauge shotguns. Because these devices are intended to scare a bear, or perhaps simply to convince it to move away, we also learned about shotgun slugs. Then, we got to actually fire some guns. One of the staff here, the research coordinator, owns a .22-calibre semi-automatic rifle and a Remington 12-gauge pump-action shotgun. The Churchill Northern Studies Centre also owns about half a dozen 12-gauge shotguns; all of these are pump-action as well, making ammunition standard for everyone here.

So, we went to the nearby Churchill shooting range (a clear bit of less-soggy tundra with a low, bulldozed ridge behind it) and fired off a few rounds, to get familiar with these deterents. We didn't get to fire the starter-pistol-cracker-round combination (loud bang, much louder bang), but we did get to plink away at a cardboard box with the rifle and blast it with the shotgun. Despite being born in Thunder Bay, and growing up mainly in Calgary, I'd never fired a gun before this evening. My first impressions: both guns had less recoil than I was expecting, but the shotgun definitely had much more kick (firing slugs; we didn't try fine shot). I was also surprisingly accurate, given my total lack of real shooting experience (disclaimer: I fired pellet guns a few times when I was about 12 years old at a summer camp, and received positive reviews for "good rifle technique").

The picture at the top of this article is a cropped and lower-resolution version of one picture amoung about 250 I took during a tundra-buggy ride last week. As I promised earlier, more and better pictures to come. That particular animal, an adult male, approached to within 2 meters of our buggy.
Posted by TheBrummell at 10:00 pm
Labels: Field Work

Hi Martin,
Can I make a quick correction for you, black bears are more likely than grizzly's to stock a person. Check out the story from Panarama about a week ago, where a mountain biker was attacked and killed by a black bear.
Ben

I though it was black bears that were more likely to be scared off. I remember being told on several nature shows that if you're attacked by a black bear, make yourself look big and be loud, and it will probably run off.

Still, that means that if you aren't big and loud, there's no reason why it wouldn't hunt you.

Anyway, cool pic. Like most people, I've only ever seen polar bears in zoos. You don't get many polar bears wandering around southeastern Ontario.

I had not heard of any incidents of black bears stalking humans as prey, but I wasn't really searching for such. Thanks for the update. My understanding is still that any polar bear is likely to treat humans as prey, whereas for other species it's only certain individual bears that undertake such behaviour.

If you're ever down here in Texas, we'll have to go skeet shooting or something equally redneck. See how you do when the target is moving..

Martin,
You are correct, it is indeed a rarity for a bear (other than Polar) to treat a human as prey. My point was only that I thought you had Grizzly and Black bears mixed up.

Oh man, whenever I get attacked by bears, I usually try to fend them off with sword and shield... though I've only ever encountered bears in video games.

Guns seem far more effective. Did you by any chance get to try out John Woo style dual pistol dives? No. Well you should sometimes.

I hope that you've been able to do all of the er, science you were required to do in Churchill before you've got to come back, because I've got a case of beer that says welcome back to 'civilization'!

No double-pistol dives (nor the much cooler double-crossbow dive), sadly. Polar bears seem disinclined to mess shit up in the grittier parts of New York's Chinatown, though, so perhaps it's for the best.

I did get to pump the shotgun and fire a second slug in what I thought was a very authoritative and rather manly fashion, though.

Thanks for the invite to Texas, Chris. Now it's official - I have a clear invitation to go down to gunland and shoot stuff. I think you're probably still underage, Chris - do I have to buy beer for this event?

Thanks for the beer offer, C-lo. I'll see what my (broken) schedule is like when I'm back in Guelph; we WILL get together, drink too much, and arrange pixels in psychologically damaging patterns before things get crunchy in September.

Martin, underage schmunderage, there are plenty of convenient stores down here whose only requirement is that you're taller than the counter.

You'll probably have physically buy the beer, but I would pay for it.

Martin, if you go to Texas, can you swing through Hodgson and get a picture of the "welcome to" sign for me? That would be swell. I would love it if you were in the photo holding a large gun and some American beer.

Fun fact: when the kids go trick-or-treating on the army base in Churchill at Halloween, soldiers are put on perimeter patrol to discourage polar bears from eating the children. Where's the fun in that?

The army base at Churchill is no more; it was disassembled some time ago. But the local children are protected by "volunteers" around town (equiped with some night-vision 'scopes) at halloween nonetheless.

Peak bear season around here is late October and November, putting halloween right in the middle of one of the largest concentrations of human-eating carnivores anywhere on Earth. I agree that this would be more fun (halloween is all about being scared, right?) if the patrols were signifciantly reduced, increasing the odds of meeting a REAL monster.

If I ever get to Hodgson, TX, I WILL get a picture of me with a gun and a big ol' can of some cheap, nasty American beer.

Excellent post (and photo). Polar bears, in the wrong situation, can be quite a bit of trouble (to put it mildly...). In fact I could see why deterrents would be better than deadly force, as a wounded polar bear is definitely one of the worst things to have to deal with.

As per black bears, there's a problem in northern New Jersey and there have been attacks now and then. A particular grisly one occurred about 2 years or so ago, where a bear snatched a baby off the front porch. Generally they're not much of a threat (I actually scared one while in Stokes State Forest last summer), but they can be dangerous in the wrong situation.

Anyway, great stuff, and it'll be good to see the rest of your photos when you get them up!

Why did my black bear comment get deleted? Maybe I was high...on gin and gatorade.

I concur that black bears are more likely to attack humans, though tangles with grizzlies usually result in more fatalities. Apparently male adolescent black bears are highly unpredicatble and the whole bo-janngling routine doesn't work very well. Last couple of years there were a few fatalities resuting from black bears that occured while campers were SLEEPING in Ontario.

I had a bit of scare in Algonquin once that put me off bears for a while.

That said, I heard that polar bears are indeed most dangerous...they actively stalk humans...and so do cougars apparently (the REAL ones, stop snickering)

So with grizzlies it's play dead, black bears it's look big and polar bears I guess it's just be dead.