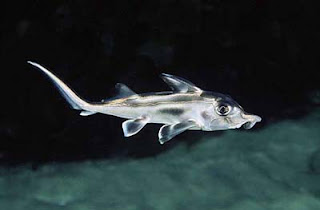 The Ghost Shark or Elephant Fish. Note that both common names are rather lame and non-descriptive. This species is taken in a commercial fishery off New Zealand, but it seems the fishery is small and the species is apparently not threatened (yet). A member of the somewhat obscure family Callorhinchidae, the Plownose Chimaeras, with only one genus and three described species.

Here's another picture, a close-up of the head. 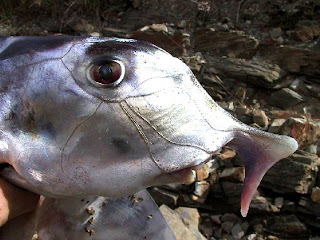 Photo one and two credit.
Posted by TheBrummell at 9:15 am
Labels: Organisms

And how many species do we have to extirpate before we realize how cool they are, or that they're threatened?

I never commented before, but thanks for the fish posts...I have a strange affinity for our piscine breathren.