In order to include SCUBA diving as part of my PhD research (in cold water!), I need to jump through some hoops. Most of these hoops are beaurocratic in nature, though I am not trying to trivialize the work done by the Environmental Health and Safety people here at the university of Guelph. Four of these hoops, tasks appointed to me, if you will, are a rather detailed look at my health. I gather that being of above-average general healthiness and physical fitness (whatever "average" is) is important for a physically demanding activity like scientific diving.

So a while ago I had an appointment with the doctor at EH&S, and he gave me two requisitions, one for a series of blood tests, the other for a chest X-ray, and the nurse there signed me up for a 'stress test' with a cardiologist in town. I got the blood work and X-ray done about two weeks ago; they said they'd send the results straight to the doctor here. Apparently, they charge $20 to print out a copy of an X-ray, so no souvenier for me.

Today, I had the stress test. This was the only thing I was a bit worried about - I don't know what I could do to improve my blood work, or chest X-ray, but the doctor told me about the stress test and it's basically a measure of physical (aerobic) fitness. A treadmill, in other words. The diving physicians demand fairly high minimum standards for employment-related SCUBA (not for recreational), so I thought I should train myself so I don't fail the test. I did, a little, but not much.

The test itself is pretty straightforward. A nurse brought me to a large-ish examining room, with a treadmill filling much of the room, and a computer with heart-rate monitoring software and intimidating electrical leads. She explained the test, then left so I could change into shorts. When she came back, she shaved some patches on my chest, necessary as I'm a hairy northern barbarian. Dry shave, with a basic bic-style disposable razor. Mildly ouchy. Then she attached the electrodes (they were many), and left to get the doctor. So I snapped a couple of pictures of myself with my crappy camera phone (Fig. 1). 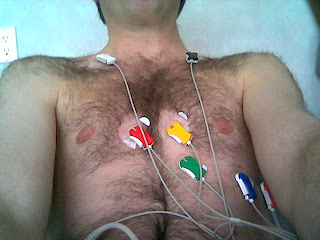 Then the doctor basically said "you want to dive? OK" and got the nurse back. I stood on the treadmill, and the program started. A slow (very slow) walk for a few minutes, as 'warm-up', then the speed of the treadmill increased in stages, about every three minutes. The third speed was close to my normal, moderately quick walking speed; the fourth was supposed to be a jog, but I was walking at my 'late-for-the-bus' speed. The final speed was a slow jog, which I maintained for longer than the required time - just for machismo, I went for 13 minutes instead of the required 12. Yay me. Then the test stopped, the nurse gave me some paper towels to wipe off the sweat, and then I changed and sat in another room until the doctor came in and told me I passed.

When I told him I was a PhD student in biology, he smiled and gave me a much more detailed explanation than what most stress-test participants probably get. We talked about METs (???) and basal metabolic rates, and speculated on the high standards (13 METs) required by these unnamed diving-physicians. I scored 14.6, so I guess I passed rather easily.

During the test, I was talking with the nurse, which may have made it a bit tougher. I was explaining to her what grad school was like, and what my research was, and what I wanted to do when I graduate (hide in the ivory tower, of course) and similar topics. She kept asking me how I was doing; before the test she'd told me to report any pain or discomfort, especially in my chest (Fig. 2). Most of the other people who do this test are ill in some way (her first question to me was "what's been going on?" in a tone of voice that suggested I should describe recent angina) and typically of fairly advanced age - I overheard another man in the waiting room described as "91 and in amazing shape". So she was a little surprised when I explained that I'm basically healthy (as far as I know) and not there as a result of recent hospitalization or weird family history. She wanted to know if my father was still alive, for example (yes, he is, and quite healthy). 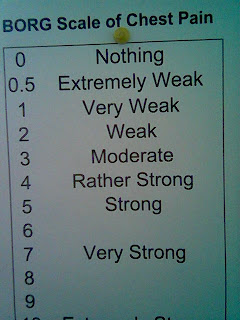 Fig. 2. The BORG scale. Quite appropriate, given the quantity of computer equipment directly attached to my body. I never scored higher than zero.

So anyway, I passed, which is good. On my way out of the building I just missed the bus, so I had to walk to downtown and catch a bus (and grab some lunch), which took about 30 minutes. Today is a nice day, so not a big deal.

I'm a happily married man, but I found the pic to be sexy =P

Watch out, you're going to have to hide from the hoards of admiring women chasing after you now that you've posted that pic.

Congrats on passing the test. I'm always fairly concerned that when I eventually go back to get a physical exam there will be some creationist lit. in the waiting room that will send my blood pressure through the roof.

...some creationist lit. in the waiting room...

None of that that I could see, but I did end up reading an article in a Feb 2007 issue of Time magazine describing "pregnancy centres" run by evangelical xtian groups, wherein they provide falsehoods and fear to pregnant women. The regional director of one such group was interviewed, and it became clear that she believed that abortion significantly increases future risk of breast cancer (it does no such thing) and that there would be no evidence-based method to change her mind - she assumed the recent CDC report (I think it was CDC, not sure) that loudly proclaimed the link was spurious and false was heavily biased by "big pharma", the usual woo-ish conspiracy theory for such things.

That might have raised my bp a little; being nervous about passing the test almost certainly did, though not to dangerous levels.

Hey, I read the same article when I went to the doctor recently. What a coincidence.