The Localness of Taxonomy

Yesterday was Linneaus' 300th birthday, apparently, so I'm a day late on this post. But I only really thought of it today, though the idea has been bouncing around my head for about a week.

By "localness" I mean the non-universality of taxonomic terms, particularly mid-level terms like "Order" and "Family". What I mean is that it's quite nonsensical to compare families, for example, across much higher levels like phyla. It's a non-sequitor to describe an order of Arachnid arthropods, such as Araneida (spiders) in terms of an order of Mammalian chordates such as Carnivora.

What the hell is Martin talking about?

This is an idea that's been oozing around my skull, formless and labile, for about a week. I've been reading way too much of Soil Biology Guide (edited by D.L. Dindall) recently, a book I highly recommend, so my mind has become clogged with obscure words for obscure taxa. Like Opiliones. What the hell are Opiliones? That question is actually more than one - what are these beasts? What taxonomic level does it describe? Why is it a chapter title in a book about things that live in dirt?

The beasts in question are somewhat-commonly referred to as "harvestmen" or "daddy-long-legs". They're arachnids, part of the same class of animals that includes spiders, mites, termites and a lots of other, much less well-known critters. Apparently, there are lots of soil-dwelling forms (with short legs) (to answer the third question) and even the long-legged, surface-striding species typically lay their eggs below ground, and often prey on unfortunate soil-dwellers that venture onto the surface. 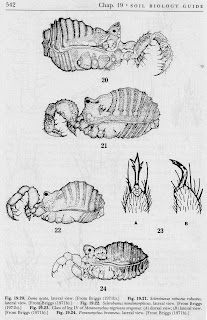 The taxonomic level for "Opiliones" is an Order. At this point my weird exclamations at the top of this post come in to play. More familiar orders might be things like Primata (Primates: monkeys, apes, etc.) or Passerines (Song birds, including everything from LBFs galore to robins, sparrows, crows, etc.). But how can I compare Harvestmen to Primates? The term "order" doesn't make sense divorced from higher taxonomic levels. I don't think it's at all valid to think of the diversity of Opilione forms in terms of the diversity of songbirds. Perhaps if we stay within the same phylum (Arthropoda).... does it make sense to compare the spiders to a single order of insects, like Coleoptera? Besides the obvious (ridiculous) raw-diversity difference (to a first approximation, most animals are beetles, Coleoptera, though there are an awful lot of spiders), everyday experience suggests comparing spiders (an order) to all insects (a class). At least, in my everday experience...

This becomes an issue of explaining what I do to a non-scientist. An ecologist, or evolutionary biologist of almost any specialization should be able to grok pretty quickly the idea that "I'm looking for a maximum diversity of animals to study, at the highest taxonomic levels" means "I collect inverts, including insects, spiders, crustaceans, snails, worms, and other, more obscure things" (a statement that spans taxonomic levels from order up to superphyla). But how many "normal" people, non-scientists, ever think about the (enormous) differences between, say, earthworms and sea cucumbers?

Moving on with another weird non-sequitor (are any non-sequitors not weird?)... in the science fiction novel Moving Mars, by Greg Bear, which I read more than ten years ago, one of the main characters gets a brain implant that is essentially a computer memory chip that provides her with intuititive understanding of basic physics. Without getting into a discussion of what constitutes "basic" physics, I'd like such chips to be invented, preferably at the earliest possible opportunity. Rather than a chip for physics (which would, admittedly, be highly kick-ass), I'd like one for taxonomy. I want to know intuitively what Tricladida, Solifugae, Mesostigmata, and Pauropoda are. I want to know without thinking about it which groups of invertebrates would be most useful to study, from the perspective of broadening our understanding of fundamental evolutionary processes like selection. And why the hell are so many things named "Psuedo-X"?

All these organizational schemes seem pretty arbitrary anyway. I suggest you come up with your own cladistics scheme and run with it. In fact, one of your grouping should include daddy long-legs and sea cucumbers and nothing else.

Not a non sequeter, but back in highschool I went on a camping trip with a friend who was deathly afraid of daddy long-legs, and our camp was full of them. They were everywhere: crawling around the site, invading our tents, etc. He tried to get away or otherwise ignore them, but I'd kill them, pick them up and chase him around the campsite waving them in his face. Good times.

Well man, it's the trade off between the usefulness of taxonomy vs. it's meaning.

If you read Gould, it would appear that most taxonomists agree on what constitutes valid differences between species that would place them in the fame Family vs. seperate Genera for example. But the actual taxonomic level itself is fairly arbitrary: Nature does not make neat little boxes.

Two books that deal with this quite in depth are Ernst Mayr's The Growth of Biological Thought (which Wilfried just read through) and Gould's Bully for Brontosaurus.

Actually, if you can find any info about Alfred Kinsey's approach to taxonomy, you could see what kind of approach an evolutionist (who actually understood evolution) would take with taxonomy: Categorizing variation within and between species rather than using averages.

Cool, thanks for the book suggestions, Carlo. I realize that nature doesn't make neat little boxen (except in the literal sense; e.g. cells), and human brain wiring leads to conflicts with reality (many conflicts).

I think of taxonomy as a useful sort of first-guess phylogeny. In my mind, families should all be about the same age (20 million years?), as should orders, classes, genera etc, with the obvious exception of species, which are the only biologically real part of the entire structure.

Categorizing variation sounds like a much better approach, and is something I also think about on a regular basis. I'll have to check those books out.