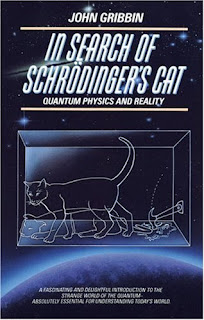 This is an excellent book for someone, like me, who doesn't know anything about quantum theory except some vague thoughts about probability, radioactive decay, "tunnelling" and other haphazardly-acquired ideas. Before reading this book, I knew about 'spin' as a property of electrons and other subatomic particles, and I knew that the entire field of quantum mechanics was basically invented by Einstein in a couple of papers in the first decade of the 20th century. But now, I feel like I know less, but have a better understanding of a lot more. If that makes any sense. If it doesn't, I'm thinking in terms of the certainty of scientific knowledge (or lack thereof).

I didn't take notes while reading this book; perhaps I should have. I know there are several points in the book I wanted to put here, but I can't remember them. I do know that the explanation of 'spin' given here is the best I've yet seen, and the repeated injunctions to stop trying to come up with a familiar-world analogy for the world of the very small because it just won't work.

The book is written in historical order - the earliest theorizing and discoveries relevant to quantum physics are presented in earlier chapters, then later work that built on this foundation. Einstein isn't the first person to appear in this book, as there was quite a body of observational evidence that had to be accumulated first, particularly dealing with the discovery of radioactivity and such phenomena as X-rays. The double-slit experiment occupies centre stage, as so it should - at least, I have been convinced of the double-slit experiment's central importance to modern physics by the excellent descriptions (there are more than one) in here.

I have seen the opinion voiced that for science writers for a non-scientist audience, formulae are death. There's a half-joking formula floating around that suggests every mathematical formula written in a book cuts the readership by a factor of ten. There are several formulae here, but they're all of the relatively easy, fairly basic form without too many parameters, and they're always associated with a good, clear diagram that helps to explain what the math is trying to say.

Perhaps my only complaint about this book, besides the fact that my copy has a weak binding and is falling apart, is the footnoting. I'm used to reading books where the footnotes (or endnotes as they may be) are typically further elaboration of a point, often in the form of a short anecdote about a contrasting opinion or historical quirk of the situation. There are a handful of footnotes of that type in this book, but the overwhelming majority are citations. Just a citation for a quote or particular factoid. For example, the footnote on the bottom of page 74, for an asterix appearing after a quote from Bohr about Heisenberg's work, is just "Quoted in Mehra and Rechenberg, volume 1 page 357". I saw that asterix and I was hoping for an elaboration, or maybe another quote from Bohr from years after the first, or a quoted reply by Heisenberg to what Bohr had said, or something, so I was a little disappointed when I just saw a citation. I think citations are important, and I'm glad that John Gribbin shows such academic rigour, but it would have been nice to get some non-bibliographical information.