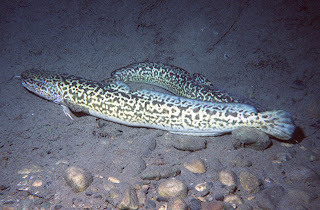 The Burbot, the only completely-freshwater member of the order Gadiformes, the cods. All of the other approximately 554 species are marine, with some species inhabiting either estuaries or the very deep ocean, and one other species with some freshwater populations (Nelson, 2006). Apparently, this species can be found in the Great Lakes of North America - not so far away from me, though I doubt these deep-water-prefering fish would ever venture into Guelph's Speed river.

This species is also a member of the family Gadidae, the cods. So it's right up the middle of the taxonomy for cods, near the "type" specimen.