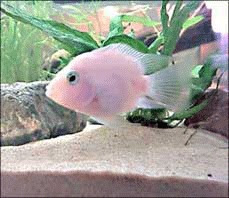 The Jellybean fish or Jellybean Cichlid, an odd hybrid of at least two species of South American cichlids, produced for their novelty value and striking colour patterns for the home-aquarium-hobbyist trade. A special request for a Friday Fish, via email. The colour patterns may or may not be the result of innate pigment production; some patterns (not shown) are apparently the result of dyes added to their food, which are temporarily deposited near the skin. I can find no solid information on this. The likely hybrid origin is also confusing - the parents are reported as separate genera! This suggests the taxonomy of this group has been dominated by "splitters", and may be in need of revision.

Since these guys are all hybrids, and I've seen no reference to their reproductive potential, I'm going to assume that this isn't a 'real' species of fish since it's physiologically incapable of forming a self-propagating population; they're an aquatic equivalent of mules. Perhaps I am mistaken, but I've seen pretty much zero reference to the reproductive physiology of these animals. This page lists some second-hand information about reports of failed broods and even rare cases of successful breeding in this psuedospecies, but no solid evidence is presented.

There is some (unsurprising) nomenclature confusion on the web, so here's another page with some more information, using the name "Blood Parrot". And another page.

Image credit here (which claims this picture is of an individual with some Convict Cichlid heritage - the confusion grows!)

Next week, I'll examine the other candidate for the name "Jellybean fish": the Jellybean Tetra. I fully expect to get just more confused.
Posted by TheBrummell at 2:45 pm
Labels: Organisms