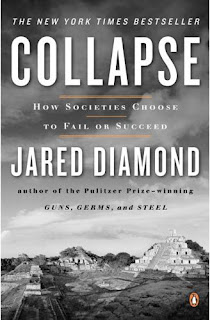 One of my favourite non-fiction books is Guns, Germs and Steel (GG&S), by Jared Diamond, published in 1996. Diamond wrote Collapse next, and when it was released I knew I wanted to read it. I bought the trade paperback edition late last year, and I actually read more than 99% of this book a couple of months ago. It took until yesterday for me to read the last two pages - though when I paused, I did not realize I had so few pages remaining.

Collapse deals with a difficult and gloomy subject - the generation of chaos and anarchy resulting from human abuse of our own habitats. Despite frequent descriptions of quite horrible outcomes (starvation, cannibalism, tribal warfare, technological regression, et cetera), the overall tone of the book is not particularly negative - I'd say it is close to neutral on the optimism / pessimism scale. Dry academic prose is often used to cover otherwise depressing information, but Diamond is sufficiently skilled as a writer to avoid that tactic. Nastiness is presented full-on, without any attempt (that I could see) to either soften the blow or to exaggerate his case. The message of the book is not a simple 'we're-all-gonna-die' rant at all; Diamond continually buttresses his world-ending reasoning with advice and speculation about what could be done to ameliorate the damage or reverse direction.

This book provides a nice companion to GG&S. Diamond's previous book describes a clear and intriguing theory to explain current and historical human geographic and cultural distribution patterns. Collapse describes a clear and frightening theory to explain how some human societies failed, and were removed from the global pattern. Creation and destruction, nearly a decade apart.

The reason this book took so long for me to read is the final chapter, supposedly the most uplifting and optimistic chapter. Grinding through descriptions of how to indirectly influence the decision-making of major corporations or governments is not particularly interesting to me. Frequent references are made in that chapter to the 'Further Readings' section at the back of the book - it was here that I actually stalled my reading. The final chapter has by far the largest section of further readings - not really surprising, considering both the available literature about reasons-for-hope and the author's own strong desire to convince others to help him change the world. Perhaps I'm just hopelessly apathetic, but I found that chapter and associated five-page list of things-to-do mildly annoying and rather boring. Don't get me wrong - you want to save the world, go right ahead, and this book contains some very useful information for you - but please don't bug me about it.

One problem I did have with the book is also in the last chapter - Diamond presents a pair of figures from another author's work (whose name I have forgotten, and I don't have Collapse in front of my right now; I'll fix this later) of world maps - one for countries of severe environmental concern, the other for countries of severe political concern. There is 100% concordance between the two maps - which I find a little unbelievable. In the text, Diamond repeatedly states that environmental problems are not the sole reason for severe social issues, and are not necessarily the triggering or underlying factor for such things as war and invasion or degeneration of trading relationships. But these two maps imply that environmental problems cause political problems and vice versa every single time. The maps fail to show several countries of political but not environmental concern - I don't recall Iran being highlighted on either map, for example.

Overall, I thought this was an excellent read, and I learned a great deal. Many things I thought I already knew were either corrected (Pitcairn Island was inhabited, and abandoned, long before the Bounty's crew ever mutinied) or put into context (the Greenland Vikings didn't so much fail as succeed in an extreme environment for an almost-unbelievable duration of 450 years). I'd recommend Collapse to anyone interested in history or current social and environmental issues.

Other countries that should be highlighted on one map but not the other (in my opinion) are:
Political: Georgia, Iran, Moldova, Morrocco, Thailand*, Venezuela, and all of the 'stans
Environmental: China, Kenya, Tuvalu, and probably others.
And Russia should probably be highlighted on both maps.

*The bulk of Thailand's current political issues probably post-date the publication of this book, so I'll let it pass.

Posted by TheBrummell at 9:45 am
Labels: History, Reviews, Science

That's a book that I want to read soon... after I finish 'Bad Astronomy', 'Breaking the Spell'... awwww, who am I kidding, I'll try to get around to it someday.

There's an extra interview with Jared Diamond at the end of my copy of The Third Chimpanzee. In this interview, it mentions that Dr. Diamond had a very successful, regular series of columns in Natural History and Discover magazines. I wish they'd release them in compilation form like Gould's...

He had essays in Natural History Magazine? Holy GRAP! That's awesome, that's where Gould's were - I need to check out that magazine. And I agree - compilations would be great.