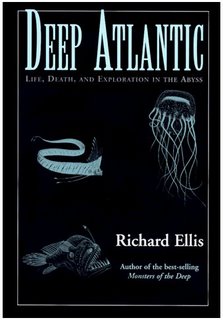 This is a fascinating book, full of interesting bits about the bottom of the sea, generally restricted to the Atlantic ocean. I'm not sure why Ellis decided to restrict the book to just the Atlantic, though he tries to explain in the introduction to the book, talking about his various abortive attempts to pull together a book about the entire Atlantic ocean before settling on just the deep bits.

Any discussion of the Abyssal zone (and the Bathypelagic and Hadal zones) necessarily includes lots of information from the Pacific (that's where the deepest trenches are) and other oceanic regions. So sometimes the focus on the Atlantic seems a little forced, as when Ellis talks about really exotic deep water squids but dismisses all mention of the relatively well-described Pacific Humbolt squid (Dosidicus gigas).

There are some pretty serious flaws (in my mind) in this book. Ellis writes for an American audience, so depths are generally presented in feet (and occassionally miles for emphasis). Fair enough, but he's very inconsistent with his conversions and presentation. Some depths are written as "the bathysphere reached a record 3,000 feet" (pg 66) or as "at a depth of 610 meters (2,000 feet)" (pg 75), which, if he was consistent, would be great. But many depths are written as round numbers of meters but converted to precise numbers of feet as "descended to 2,700 meters (8,856 feet)" (pg 78), or written as fathoms and converted to feet, miles, or not at all! Some depths in meters are similarly not converted to feet, making comparisons between different depth-phenomena difficult. Sometimes, the meters are listed in parentheses, or fathoms in parentheses. This is just sloppy writing, and should have been caught by the editor.

Similarly, species names are sloppily discussed, particularly on the section about deep-sea cephalopods. Most of the fish species are clearly described with both genus and species names, but many squids are mentioned as only the genus name, but described using the word "species". I don't mind if he's talking about a genus, particularly a monotypic genus, but after he talks extensively about the conventions of scientific nomenclature, he ignores his own rules and throws single-name descriptors at the reader.

Another problem I have with this book is the inconsistent way it's put together. Some descriptions early in the book, like sections on particular exploratory dives, are referenced repeatedly in later parts, sometimes with much of the story repeated almost word-for-word. Other references are made to descriptions later in the book, with or without relevant page numbers. Chapters don't seem to flow in an orderly way - descriptions of specific phenomena in particular species are placed adjacent to broad descriptions of features of large taxonomic groups of organisms.

Adjacent paragraphs sometimes skip from one genus in one family to a different family (as a whole family) in another order. Some paragraphs contain descriptions of interesting physiological processes in one group, then jump to talking about a different group, without explaining the key differences between the groups. The initial description of bioluminescence is particularly bad, as he describes the two main methods - either intracellular or via intercellular mutualistic bacteria, then never tells the reader which organisms use which method, except a brief mention that some angler fishes (Lophiiformes) house these bacteria in their esca (the dangly lure thing on their heads).

The index is close to useless. There is a section on a very odd species of fish, Giganturus chuni, described by Ellis as a contender for weirdest fish of all. He quotes a paper from 1925 that describes a specimen captured in a net with a large Chauliodus sp. in its gut. But he doesn't say where his description of Chauliodus is, and the index lists a reference to Chauliodus sloani on pg 197, where it's mentioned in parentheses as having a similar trait to a species of deep-water shark discussed on that page, with reference to pg 239, where he discusses Chauliodus spp., with an illustration on pg 240! Why does the index not list pg 239 or 240?

Ellis sprinkles quotes from other important works liberally throughout the text, but many are unreferenced, just blocks of quotes stuck into paragraphs. Some references are incorrect, like his repeated citation of "Nelson, 1993" - Nelson's recent edition of "Fishes of the World" (a taxonomic reference list) was published in 1994 (Nelson updated with a new edition in 2006). Again, this looks like sloppy editing.

The illustrations are great, though. There are hundreds of line drawings of almost every species mentioned, though scale bars would have been a nice touch. There are annoying inconsistencies between the main text and some picture captions, like how the text talks about the maximum length of the giant squid (Architeuthis princeps) being 60 feet, but the picture caption on pg 188 stating 57 feet.

Overall, this was a great book to read, with lots of "hey neato!" moments, but the general sloppiness made it easy to put down.

Sounds like the kind of book that's written for the general audience, but that sometimes gets too technical and turns them off. Therefore it fails to find its appropriate niche and lands in the bargain bin. A sad tale, but happens very often.

I find the whole metric/imperial system thing ridiculous. Most of the people in my lab are foreign, and they've pointed out how Canada is still retarded in using metric for most things, but imperial for some, confusing the hell out of everyone.

Actually, when I was at Dal, taking introductory Physics, our prof. said that the book he'd chosen had the best treatment of the subject, but was written by the most idiotically Imperial-Patriotic Americans he'd ever seen. It was ridiculous: Any time the authors didn't have to use a physical constant, everything was presented in Imperial measurements, yet every time a physical constant was required, it was obviously presented in metric.