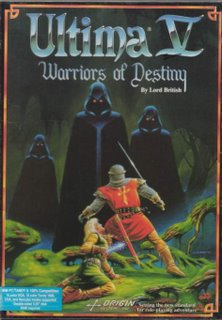 Last night, I stumbled upon the disks for Ultima V, a top-down, party-based RPG published by Origin in 1988. At the time, I'm sure the 3.5" floppies were considered state-of-the-art.

Now, modern computers won't run that game at all. Many really new computers (like the laptop I'm writing this post on) don't have floppy drives. Fortunately, I own 5 computers, three of which are horribly obsolete - a Pentium 133 tower, a 486 DX2 50 horizontal desktop (remember when those numbers used to mean something?) and a semi-functional 486 laptop.

These had been collecting dust for a few months, but since my home AMD 850 / XP won't deal with Ultima V, I flashed up the ancient 486. No luck! The first disk apparently has a few bad sectors on it, and these cause the computer to crash unpleasantly. Not expecting success, I swapped out the CPU box for the Pentium - and Voila! Windows 98 lives up to its old reputation as games-friendly.

There's a weird glitch when it comes to quitting the game, but so far everything seems OK. I wasted much time today digging up the old manuals and hint guides for the game online, so tonight I may spend some time with a classic. Lord Blackthorn, consider yourself warned.
Posted by TheBrummell at 5:57 pm
Labels: Computers, Stuff

Oh man, I dunno if I can ever really play another Ultima game... Lord British was just such a fricking weirdo...

But seriously, I LOVED Ultima 7, though I never completed it. But seriously, all of the Ultima games were so big and random that who really completed ANY of them? Actually, I did complete Ultima 8, but that was pretty much the bastard step-child of the whole series anyways, so I guess it doesn't really count.

I'm still peeved that Ultima 9 was such a complete let-down. I mean the game could have been ABSOLUTELY AWESOME, but was so full of bugs that it was pretty much unplayable. Put it this way, it still runs pretty choppy on PCs that have come out 7 years AFTER its release. And it crashes a lot... I know, I have it here in the Hammer and tried it on my new pc. It's a shame, because greatness lay just beneath all the shit-ass bugs...

I've run into a show-stopper: it doesn't recognise the disk when I want to load a saved game. Damnation!

I could try running through the entire game (80+ hours?) in one sitting, or just leaving the machine running, but I suspect it would crash at some point, and that old P-133 makes alarming noises during operation. I don't think it has the stamina.

The randomness and breadth of action in those Ultima games is one of their great strengths, I think. When I played U 5 so long ago, I made it close to the end, but I know there was a ton of stuff I hadn't done yet necessary to finish.

Mostly I just liked crossing and re-crossing bridges so the randomly-appearing trolls would show up and I could Munchkin them (kill them and take their stuff).

Last night, in a fit of apathy, I tried to get Ultima V working.

And I succeeded. Huzzah!

The second disk - variously referred to as the "Player Disk" or the "Britannia Disk" had some serious bad sector troubles. Fortunatly, before it died, I had copied all its files to a hard drive, from which I was able to copy them onto a healthy floppy.

Then I was slain by a plague rat.