Today, I have been pretty much entirely useless. Felix and I solved a problem we'd been having with some molecular work this morning, but beyond that, I've accomplished approximately zilch. So I'm haphazardly pounding on my keyboard to add a post to my blog to push the stupid formatting error of the light-sabre post off the bottom of the screen and to write a long stupid punctuation free run on sentence.

So I'll post a picture from my visit to Zurich, maybe this will motivate me to work on my beg-for-money PhD proposal.\ 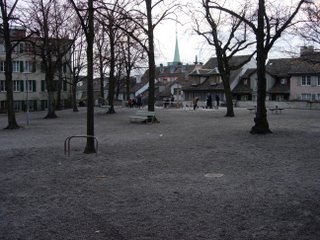 This is a picture of the Lindenhof in downtown Zurich, a kind of municipal park on top of a hill, overlooking the river and the rest of the city. If I was a student at Universitaet Zurich, it would take me about 25 minutes to reach this spot from campus by Tram.
Posted by TheBrummell at 3:19 pm
Labels: Grad School, Procrastination

This looks like the kind-of place where there are a lot of Vampires... I'd bring silver and garlic...

I didn't see any Vampires. Of course, you can't tell from the picture, but that was taken in the early afternoon, it's just that the weather in Zurich in mid-February is generally crap.

I did see several old men playing chess on a large outdoor set. There was another set being played by a group of younger men, perhaps in their early thirties. The younger men were much more animated in their movements and discussions, but I suspect the reason they're weren't playing with the geezers was the old guys would have utterly razed them (see, it's a real word, Julie).

There was also a fountain, with quite nice drinkable water.