My apologies to all (both?) my readers. I have been slamming my head against my keyboard with my PhD funding proposal for the last couple of weeks, and have allowed activity on this blog to suffer in consequence. In procrastinating writing the 2500-character abstract for that proposal, I can make some ammends here. 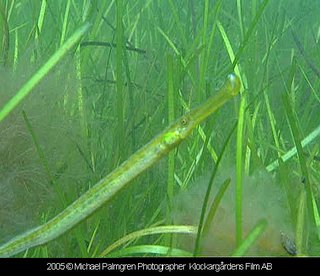 I quite like this guy. The photo really shows off the camoflage ability of this fish. This genus occurs world-wide, but this particular species is native to the shallow coasts of Northern Europe, from about Sweden to the Mediteranean, and has been well-studied in the context of mating system and sexual selection, since they're sex-role reversed. In other words, unlike for most animals, males are choosy and females compete. 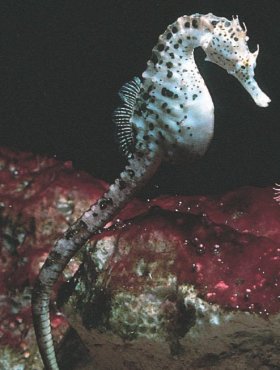 This is the species I'll hopefully be working on for my PhD - the Pot-bellied Seahorse, native to Australia and New Zealand. Some seahorse species are surprisingly temperate, but most are tropical. This species is the largest of all seahorses (probably there are 32 species, but counts vary), and grows to a maximum length of about 30 cm. The body colour is also quite variable - I find this photo striking in the colours displayed.

The Syngnathus photo is from http://www.oresundsfonden.m.se/sida/lankar.htm, another site in a language I don't understand. Hopefully they don't mind too much over there. The Hippocampus phote is from Project Seahorse, who write in English, but I don't expect them to mind too much either.